There are a number of different options available for distributing reports as well as naming workbooks and individual sheets. In this lab, you are going to explore some of the more advanced methods.

If you are following the Training Labs, this report file is continued from the previous lab: Training Labs > Lab 7 Exporting Data > Lab 7.2 Basic Distribution.

Step 1: You will add [Location] as a prefix and suffix for the worksheet (“tab”) names. Type [Location]_ in cell G15 and [Location]_ in H16. The underscore _ was added to the text to allow a spacer between the original tab name and the location value. The end result is that the tab names will be modified as they are created so they match the location they represent.

Prefixes and suffixes can use the values in Report Filter columns so they do not have to be manually typed. In addition, you can use values that are set up in Global Variable Definitions, which will be covered later.

Step 2: You can also type prefixes or suffixes manually, which is shown below. Enter Loc_7120_ in cell G17.

When the distribution is executed, the tabs should look like the image below. 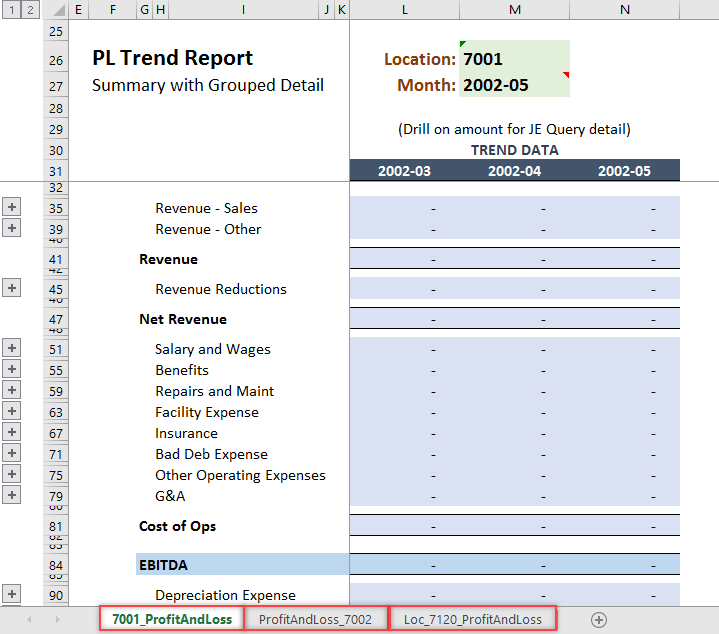 Once you clear the Tab Names columns, it should look like the image below.

Step 4: Add more practical tab names using a prefix of location that uses a hyphen as a spacer. Type [Location]- in cells G15, G16 and G17.

When you are finished, the distribution should appear like this:

The distribution process allows for global variables that can be used in defining the distribution. Keywords can dynamically alter the names and locations used by the distribution process. This allows for quick report maintenance and also for assigning values easily from one cell change. As you can see in the Global Variable Definitions, you defined [YYYY-MM] with the value 2002-06. You will use that to define the Month filter column so next month you can run reports for June by changing only one cell, E36. 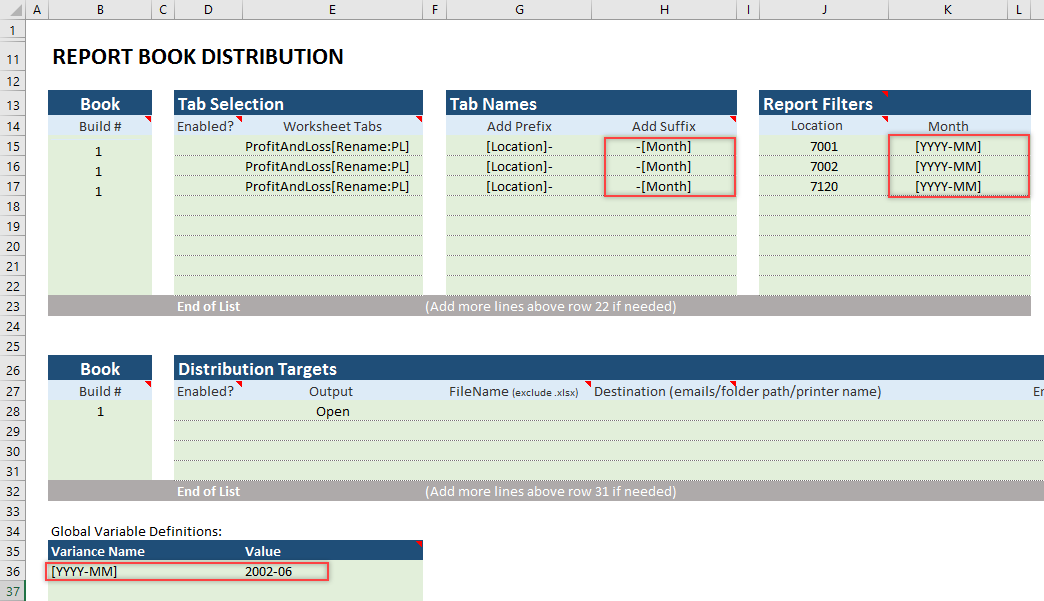 The resulting distribution looks the same, but now it requires less maintenance.

The distribution process allows a wide range of export options. The screenshots below show the drop-down that lists all current options. These are described in the following table.

Sometimes you may want include more than one worksheet in each line of the distribution, and it can be easily done by separating additional tab names with a comma.

Step 1: To do this, navigate back to the distribution and type BalanceSheet after ProfitAndLoss, as shown below.

Each workbook Build of the distribution process results in a separate workbook. For example, you can create one report for a business director, one for a regional manager, and another for a location manager. The director needs to see all districts, the regional manager needs specific districts, and the location manager needs just one location. This is easily accomplished by creating a different Build with slightly different parameters for each scenario.

In the example below, you are creating a simple workbook for the Profit and Loss reports and a separate one for the Balance Sheets.

In the previous examples of building a distribution report, the data was systematically pulled for each report after the creation of the report. This section covers how to turn off the automatic pulling of data.

Step 1: Select Cell D15, D16 and D17 then open the dropdown menu for each and select the Prep option for each cell

Now you can see that the reports were built, but no data was pulled automatically for the specified reports. 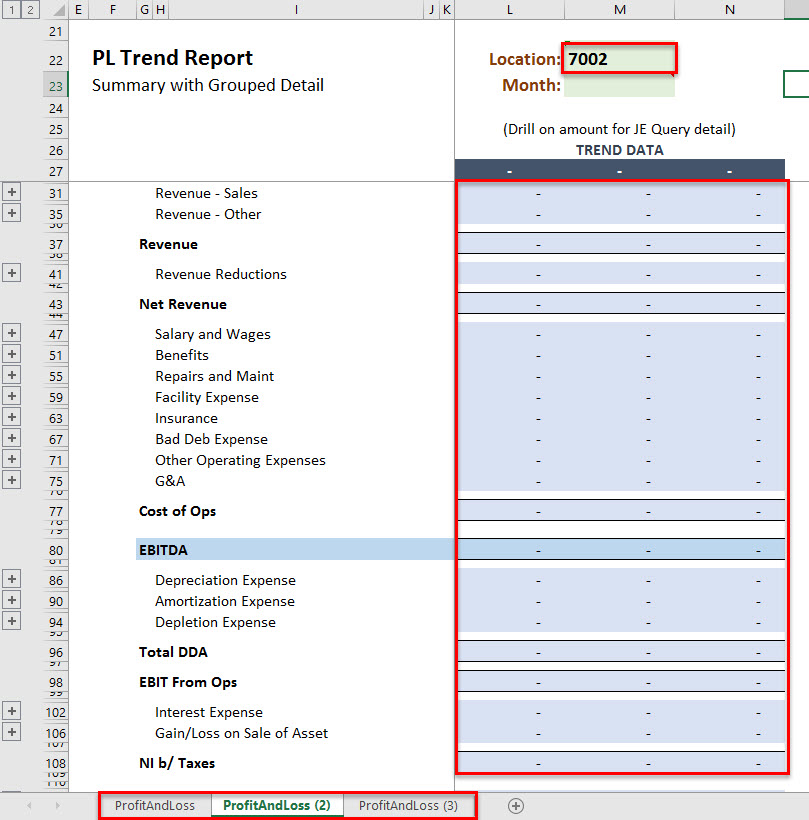 In the distribution examples above, each location is entered on a separate row. Using the Grouping Segments feature, the distribution process will automatically add new tabs in the new workbook for every item in a group. To use this feature, the groups must be configured first. In the following example, you are using the group Consol which is setup to include locations 7001, 7002, and 7120.

Step 1: In the below example you will use the filter: [AddTabsFor]:Consol, under the Location column.

Step 4: You can also put Segment2 in the prefix or suffix columns to dynamically create the tab names for more organization.

Step 5: All settings are now contained in one line. When this distribution is run, the values for the group Consol are retrieved and used in generating new tabs. Run the distribution to see how it looks.

As you can see, with only one distribution row, you created a tab for each Location in the grouping, and each tab was named with the location so that you can quickly see which tab has which information.